The construction of the Oil Terminal in the Ust-Luga Commercial Sea Port is a milestone in the development history of the transport and logistics system in the North-West Region of the Russian Federation. Once muddy and deserted, the coast of the Luga Bay has been transformed, and in place of an overgrown bay, an alluvial raised beach was created, where, in an area of 100 ha, the necessary structures were constructed with modern berths, railway tracks and other facilities of the Oil Product Terminal.

The decision on the need to build the Oil Terminal in Ust-Luga now seems quite obvious: it was determined by its strategic position on the Baltic Sea. From the geopolitical point of view, Russia, as an oil power, could not tolerate a situation where the lack of sufficient oil product transshipment facilities in this region forced its oil companies to resort to the services of foreign ports. To this effect, the constructed bulk oil cargo complex in the Ust-Luga Port is a state-of-the-art, high-tech terminal and an element that strengthens the Russia’s economic sovereignty.

In 2009, when the foreign capital ‘fled’ from Russia, Gunvor, one of the world’s largest oil traders, took an unprecedented step – they purchased Rusneftbunker, OJSC and announced their intention to implement a very ambitious, both in terms of time and finance, investment program, willing to invest a billion dollars in the construction of an oil products cargo terminal, to accept the first batch of cargo in Ust-Luga already in early 2011.

After the change of shareholders, the Terminal’s project design and the strategic objectives were radically revised: according to the new strategy, the Terminal’s maximum capacity was increased 3 times.

The construction of the Terminal was divided into 4 phases, and the work started on the deserted and muddy coast: the bottom of the shallow Baltic Sea was deepened; berths and tanks were constructed; work was carried out on construction of railway jetties. As a result, by the autumn of 2011, a new serious player appeared in the oil products transportation market, whose declared transshipment capacity was estimated as thirty million tons per year: 19 mln tons of black and 11 mln tons of light oil products, which equals to more than a quarter of the total Russian oil products exports.

The terminal’s technical parameters are unique in many respects:

A priority in the construction of the Terminal was environmental safety. The use of modern technologies excludes any impact of the Terminal on the Luga Bay’s environment. Being aware of the uniqueness of the Baltic Sea – a region where the Terminal is located, and where thousands of people live and work – the Company set itself the following task: The operating Terminal should not affect the ecosystem of the Bay, in which salmons are still being fished, and smelts spawn in the local rivers. To achieve this goal, a lot has been done: in the Terminal’s territory, water treatment facilities were constructed, where a multi-stage water treatment is performed using clarifying and sorption filters, as well as UV disinfection. Independent licensed organizations and the Company itself continuously monitor the condition of the air and water space, for which purpose the facilities are equipped with sensors. The readings of the sensors are processes around the clock by the special automated system, that is ready, in case of any emergency situation, to immediately adjust the operation of all the Terminal’s services. The Company fulfilled all the requirements of State authorities regarding the control of the water body’s condition. To minimize the impact in case of an emergency spill of oil and oil products, the Oil Spill Response Plan was developed and approved. The necessary emergency and rescue equipment was ordered with the best world manufactures, and the only Ust-Luga SCP station with a berth for environmental ships was constructed.

The Station includes about 50 vehicles, the necessary equipment and vessels, and is constantly reinforced. In 2016, the Company acquired Yamburg, an ice-class service boat built by Damen Shipyard. Putting this vessel into operation will increase the efficiency of routine preventive activities in the water area. The boat, that has no analog throughout the North-West Region of Russia, is equipped with an additional system for applying reagent on the water surface to eliminate film contamination. It has a tank for oil products collection from water, a load-lifting mechanism and a fire monitor for delivery of fire-extinguishing foam.

In addition, for the purpose of fire safety in the Terminal’s territory, the Company has put into operation an automatic fire extinguishing system with a 25 km long pipeline; constructed and commissioned a fire-fighting station with 5 vehicles; established a fire-fighting brigade consisting of 85 professional rescuers.

The Terminal was constructed in four stages. In 2015, the Terminal completed the construction and commissioned the facilities with a design capacity of 30 mln tons per year, including 19 mln tons of black oil products: fuel oil of various grades, vacuum gasoil, and 11 mln tons of light oil products: stabilized gas condensate, gasoline, and naphtha. 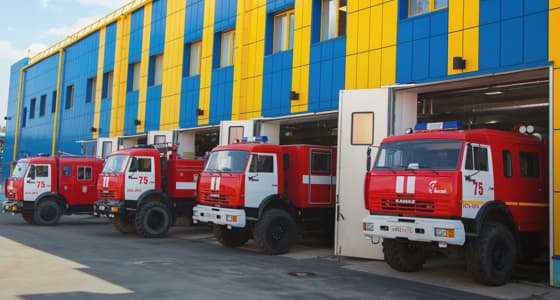 The amount of transshipped cargoes increased with commissioning of construction phases

The transshipment is conducted with observance of the highest environmental, industrial and fire safety requirements and standards, with a consistently high quality of service provision. It is possible due to the highly professional team. Understanding the importance of the human factor in the production process, the Company undertook the comprehensive set of tasks to ensure social security of its employees: 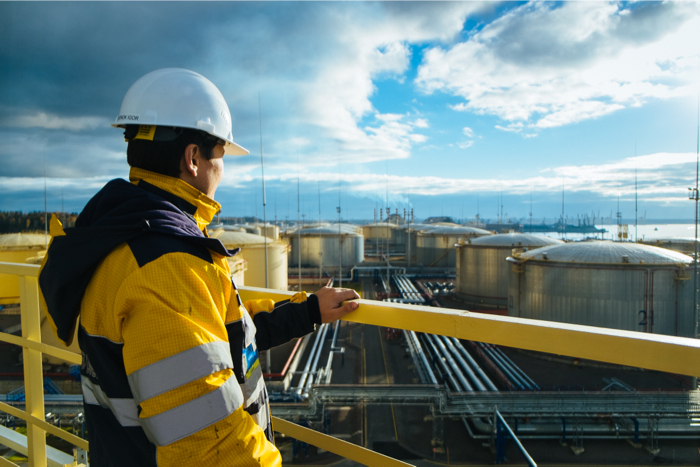 To provide accommodation for the invited specialists, a residential house was built in the Town of Kingisepp at the Company’s expense: all this is the Company’s social policy.

In any case, even the current success, with all its unconditional components – from a well-tailored team to the properly chosen and correctly used business model – is only one of the stages of the Company’s development.